The aboutDereham Partnership has received the completed report recommending new pedestrian signs for Dereham town centre from specialist consultants Streetwise. The expert from Streetwise, Peter McGrail, spent a week walking all the streets in the town centre and visiting all the attractions to see how they could best be served by new signage. 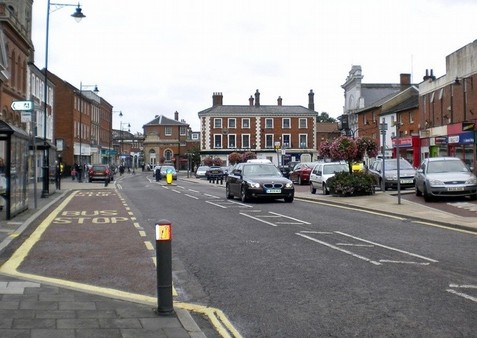 Peter also met with representatives of several key local stakeholders, including Dereham Town Council, Breckland Council, Norfolk County Council, Dementia Friendly Dereham, Walkers Are Welcome, Friends of Dereham Memorial Hall, Dereham Windmill and the Chairman of the aboutDereham Partnership. All of these organisations were able to express their views about what would be needed from the new signage system.

“Everyone who met with Peter commented on his professionalism,” said aboutDereham secretary Carolyn Coleman who organised the consultation event. “He listened very carefully to our consultees and shared his knowledge with us and his thinking about how the new system could serve the town and visitors.”

The report, which was funded by Breckland Council’s Market Towns Initiative, has identified 20 locations where signs could be located. These include to key local attractions, such as Bishop Bonner’s Museum, the Dereham Windmill and the Mid-Norfolk Railway. However, the real heart of the proposal is a series of new signs running from the Cherry Tree car park to the public library. Branching off this will be direction signs pointing to the Memorial Hall, the windmill, the railway and other attractions.

Ken Hawkins, Vice-chairman of the aboutDereham Partnership and also the town’s volunteer footpath warden welcomed the report. He said, “I am pleased that the report recommends that many of the new signs will display a town map so that visitors can find places quite easily. Some signs will also contain interpretation panels with short descriptions of points of interest.”

Chairman of the Partnership Mike Webb also said he was delighted with the report. He said: “When we are able to design and install the new signs, this will give a real boost to the town centre as a more welcoming and accessible environment. We now aim to sit down with our partners to discuss possible funding for the new signs.”

The aboutDereham Partnership is grateful to Breckland Council for funding the wayfinding study and particularly to Councillor Alison Webb who has been supportive of this project from the start. The final report can be viewed here.